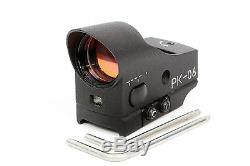 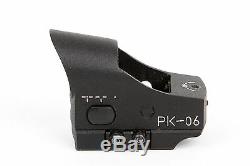 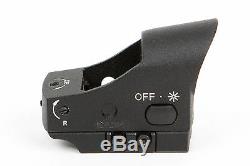 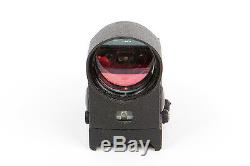 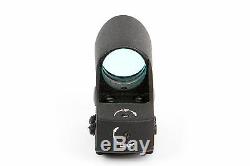 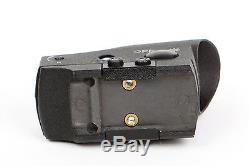 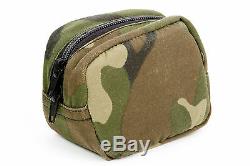 BelOMO (Belarusian Optical and Mechanical Assosiation) is a major opto-mechanical assembly plant of the former USSR and Belarus now. The Assosiation incorporates several enterprises which are engaged in developing and manufacturing of high-precision lasers, topographic and multispectral photographic equipment, photogrammetric systems and complexes, optoelectronic and optical and mechanical devices, medical equipment based on laser systems and different instruments and units for marine services, tourism, medicine, space. Collimator rifle scopes (CRS) are modern, light-weight, simple to operate, serviceable. The aiming mark of collimator riflescopes - a well seen on any background red spot - enables to conduct aiming under different illumination conditions (day-light illumination, in the twilight or in complete darkness in combination with night vision googles).

Riflescopes are hermetically tight and filled with dry nitrogen to avoid weeping of optics due to temperature differences. The main advantage is decreasing of the aiming time by more than three times as well as increasing of aiming accuracy twice as high. The aiming mark allows executing aiming under different illumination conditions. Compatible with night vision googles.

Discrete brightness adjustment of the aiming mark can be carried out automatically or manually. CRS are hermetically tight and filled with dry nitrogen to avoid weeping of optics due to temperature differences. CRS can be mounted on AK submachine guns of all modifications and other automatic small arms which have a seat - a guide strip of the type «Dovetail». Designed for engaging fast moving targets and targets appearing for a short period of time in close quarters. This is the best Belarussian small open collimator "red dot" combat optic using laser-generated "heads-up display" (HUD) technology to superimpose a reticle pattern onto a filtered lens to provide precision CQB target acquisition.

This sight has been produced with three types of aiming mark: in the form of a dot and in the T form and combined T and dot. They can be simply switched by push of a button. PK06 can be used in the temperature range from -40 °C to +50 °C (-40°F to +122°F). Its light, compact, shockproof, waterproof, and extremely rugged.

Aiming mark angular size, ang. Aiming mark brightness gradation number. Exit pupil diameter, mm, min. Quantity of sighting marks types. Power source of reticle illumination. Continuous operation time without battery replacement under average illumination conditions, hrs. Operating temperature range, °C (°F). From -40 to +50 (-40°F to +122°F). Types of the weapons on which it is being installed. Collimator Red Dot Scope For Weaver Mount. Original by BelOMO" is in sale since Sunday, April 8, 2018. This item is in the category "Sporting Goods\Hunting\Scopes, Optics & Lasers\Red Dot & Laser Scopes". The seller is "ml-gvalt" and is located in Minsk. This item can be shipped worldwide.